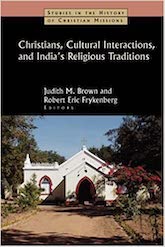 Christianity has been one of India’s religious traditions since its beginning, but the 19th and 20th centuries saw a new wave of Protestant missionary concern with India which coincided with British rule on the subcontinent, and the growth of modern forms of communications. Christians became involved in new forms of cultural interaction, which have had a major impact on Indian culture and society. These essays examine the many and diverse cultural interactions which have occurred between Indian and foreign missionary Christians with India’s other religious traditions in the 19th and 20th centuries, showing how Christianity has played a significant role in the development of Indian culture at many levels, among both the educated and the poor.