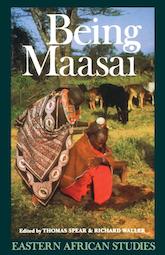 Thomas Spear (Editor), and Richard Waller (Editor). Being Maasai: Ethnicity and Identity in East Africa. Ohio University Press, 1993.
Everyone “knows” the Maasai as proud pastoralists who once dominated the Rift Valley from northern Kenya to central Tanzania.

But many people who identity themselves as Maasai, or who speak Maa, are not pastoralist at all, but farmers and hunters. Over time many different people have “become” something else. And what it means to be Maasai has changed radically over the past several centuries and is still changing today.

This collection by historians, archaeologists, anthropologists and linguists examines how Maasai identity has been created, evoked, contested, and transformed from the time of their earliest settlement in Kenya to the present, as well as raising questions about the nature of ethnicity generally.