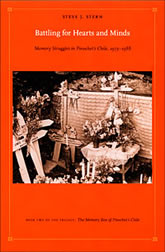 Battling for Hearts and Minds is the story of the dramatic struggle to define collective memory in Chile during the violent, repressive dictatorship of General Augusto Pinochet, from the 1973 military coup in which he seized power through his defeat in a 1988 plebiscite. Steve J. Stern provides a riveting narration of Chile’s political history during this period. At the same time, he analyzes Chileans’ conflicting interpretations of events as they unfolded. Drawing on testimonios, archives, Truth Commission documents, radio addresses, memoirs, and written and oral histories, Stern identifies four distinct perspectives on life and events under the dictatorship. He describes how some Chileans viewed the regime as salvation from ruin by Leftists (the narrative favored by Pinochet’s junta), some as a wound repeatedly reopened by the state, others as an experience of persecution and awakening, and still others as a closed book, a past to be buried and forgotten.

In the 1970s, Chilean dissidents were lonely “voices in the wilderness” insisting that state terror and its victims be recognized and remembered. By the 1980s, the dissent had spread, catalyzing a mass movement of individuals who revived public dialogue by taking to the streets, creating alternative media, and demanding democracy and human rights. Despite long odds and discouraging defeats, people of conscience—victims of the dictatorship, priests, youth, women, workers, and others—overcame fear and succeeded in creating truthful public memories of state atrocities. Recounting both their efforts and those of the regime’s supporters to win the battle for Chileans’ hearts and minds, Stern shows how profoundly the struggle to create memories, to tell history, matters.

Battling for Hearts and Minds is the second volume in the trilogy The Memory Box of Pinochet’s Chile. The third book will examine Chileans’ efforts to achieve democracy while reckoning with Pinochet’s legacy.