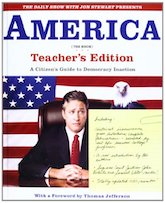 A humor book written by Jon Stewart and other writers of The Daily Show that parodies and satirizes American politics and worldview. It has won several awards, and generated some controversy.

An updated trade paperback edition was published in 2006 as a “Teacher’s Edition”, with updated coverage of the Supreme Court Justices (including Samuel Alito and John Roberts, who were appointed after the 2004 book’s publication), and fact checking by Stanley K. Schultz, professor emeritus of history at the University of Wisconsin–Madison,[1] with red marks and remarks appearing throughout, correcting the satirical “mistakes” (and a few honest errors) of the original edition.