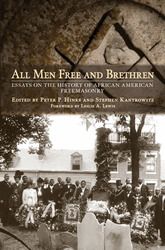 In early March 1775, an Irish soldier initiated a dozen or more black Bostonian men into a lodge of Freemasons, making them probably the first people of African descent formally admitted into Freemasonry in the Atlantic world. Prince Hall, a freedman, would emerge as the leader of this group as they worked together to establish a tradition of African American Freemasonry that has persisted ever since—a tradition that still carries his name.

All Men Free and Brethren is the first in-depth historical consideration of Prince Hall freemasonry from the Revolutionary era to the early decades of the twentieth century. Through a growing network of lodges, African American Masons together promoted fellowship, Christianity, and social respectability, while standing against slavery and white supremacy. The contributors to this book examine key aspects in the history of the Prince Hall Masons, from accounts of specific lodges and leaders to broader themes in African American history: abolitionist activism, the limits of freedom during Reconstruction, political oration, the role of women in the black community, and relationships between Masonry and African American churches.

Also included are several appendixes containing key texts from Prince Hall Masonry, a glossary of Masonic terms, and lists of archival repositories and contact information for present-day lodges. Edited by Peter P. Hinks and Stephen Kantrowitz, All Men Free and Brethren is a major contribution of the history of Freemasonry, African American history, and the broader history of race, citizenship, and community in the United States.