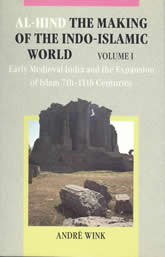 This book is the first of a projected series of five which aims to analyze the process of momentous and long-term change which came with the Islamization of the regions which the Arabs called al-Hind, that is India and large parts of its Indianized hinterland. The series is set up in a chronological order, starting with the early expansion of the caliphate in the seventh and eight centuries and ending with the beginnings of European colonization. In this millennium of Islamic expansion five successive stages are distinguished, taking into account the world-historical context.

Each stage will be covered by a separate volume. The present volumes covers the period of the seventh to eleventh centuries, the early medieval period in which the Islamic Middle East acquires economic supremacy while establishing new links between the Mediterranean and the Indian Ocean.