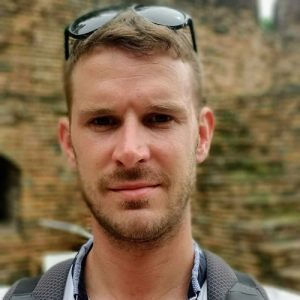 Hi, I’m Tyler (He/Him). I am a historian of early modern Indian Ocean religious and diplomatic networks, and a Ph.D. Candidate in South/Southeast Asian History. My dissertation is being co–supervised by Anne R. Hansen and Mou Banerjee. In 2021, I will be a Fulbright U.S. Student Research fellow in Sri Lanka.

My current research examines connections across maritime Buddhist kingdoms in what are now Sri Lanka and central Thailand. I aspire to chart the emergence of mutilocal religious, political, and interregional affiliation as these operated an interconnected Indian Ocean world, particularly in the context of the Dutch East India Company’s commercial projects in and especially between these polities.

I am captivated by the ways that Buddhist monastics, monarchs, and especially ordinary people have cultivated and maintained often tenuous networks of cooperation across the Bay of Bengal in the mid-eighteenth century, and how these circulations operated as valuable historical resources as they were—and still are—invoked in subsequent historical writing, and in contemporary disputes throughout Southern Asia in the contexts of gender, ethnicity, and contested visions of pluralist religious modernity. My research is conducted in, and prior language training includes, Sinhala, Thai, Dutch, and Sanskrit.

Originally from Northern California, I completed my BA in Philosophy and Religious Studies at the California State University, Sacramento in 2013, and my MA in Religious Studies at the University of Colorado Boulder in 2016. My previous MA research, drawn on ethnographic research conducted in Sinhala and English during the winter of 2015–16, centered on strategic representations of Buddhist women’s piety in the overlapping contexts of women’s ordination disputes (bhikkhunī ordination) and gendered nationalist discourse in contemporary Sri Lankan Buddhist politics.

From 2004 to 2013, I worked as both a general and an assistant manager of a 12+ person retail and production management team. Together, we ran a profitable retail location in the Sacramento, CA metro area of a major printing and shipping corporation; FedEx Office (formerly “Kinko’s”). With extensive experience in people management, human resources, retail financials, customer service, and contract customer relationship management, I oversaw a hub–and–spoke project management team in my guidance of ever-changing operations and objectives, especially as FedEx navigated the 2008 financial crisis.